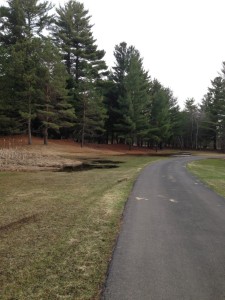 I was reminiscent of the time I spent in the North Country of New York this Thursday and Friday. Four years (it seemed like two days, but the calendar says different) I was at Potsdam getting that Music Ed degree. The North Country welcomed me back as I arrived Thursday to a Southern wind, blowing warm air through pine trees that were green with spring. I walked in shorts and a T-shirt to relax before my big day on the radio which, as you know by now was delayed for national news. Friday morning I woke up at 5:30am to be in top shape for the 8:30am session. I saw news updates on my phone but I was trying to stay in my head and warm up as the sun rising. When I got there Todd Moe was shuffling the morning’s playlist of announcements around the national NPR feed covering Boston; I set up with Joel the sound engineer (and later I learned musician and producer, he’s got this grant project compellation called “Music Heard Up North”). Luckily, we still had the time and space to record at least! The segment is airing this Friday at the original performance time. This appearance wraps up the year-long journey that has been documented through our NCPR Audio Blogs. It goes almost without saying how much of a pleasure it was working with Todd and getting to know the NCPR staff; I’m really looking forward to seeing them again soon. P.S. Today we reached #1 on the ReverbNation charts for Folk in NYC! Thanks for your support friends.